Having lived in suburbia for the past year I have a few more things to add onto my original post. Plus a link-fest of relevant sites. I redid my house’s ‘walkability‘ and scored 46 compared to last year’s 55, even though I live in the exact same house (strange).

Anyone who has been to this site would know that I managed to start my own garden. It was only small, watered entirely with greywater from my showers, and it produced (is still producing) lots of booty. [disclosure: It did get watered occasionally on town water via a drip system that was turned on sometimes on watering days, but that only reached a couple of spots and the garden certainly did not rely on it.]
In doing this I did not use even close to all my shower-water, or even a quarter of it. I shower for less time than the save-water timers, however I guess my shower-head is probably putting out easily 15-20L/minute. What I am trying to say is that I could have watered a lot more veggies than what I did.

My resolve to do things that I believe in, like gardening, has recently extended to bike-riding. The station that previously I could walk to in 20 minutes is now a 5 minute bike-ride away. This also increases what I can take with me on a journey cos I have a fabulous bike-basket on the back. The other day I also connected lights which means I can ride home in the dark, this makes it a little safer for me to catch the train home late at night. I feel much safer speeding away from the station on my bike than walking away weighed down by stuff.
I’ve also found that church is within riding distance, as are some family member’s houses and many many shops. This is not only making me healthier but cutting down on my car use which not only saves money, but the earth.

Talking about saving the earth, I went to the Sustainable Living Festival (highly recommended), and Cecilia told me that to have a worm-farm is to save the world. After a little bit of thought I totally agree (although obviously not as the only thing one does). Worm farms can be made by anyone, anywhere – even if all one has is a balcony – and thus those in the suburbs have no excuse. However wormfarm costs seem to be generally in excess of $100 (after a quick google), the solution to this is to make your own. Most DIY worm-farms recommend using polystyrene, but I just can’t condone that, so I found one that also recycles old stuff. Now cynics (like young Joanne) claim that worm farms are so hard to maintain that even my Mum (aka gardensuperwoman) killed worms in her younger days, but she had younger kids in those days and rather than persevere she gave up. Cecilia says that everyone kills their worms every now and then, apparently they all die once they hit 30*C. Some tips for preventing that are to keep them in the shade on those killer hot days, and also to put a wet towel over the contraption. So, given the fragile vitality of a worm, my solution to not having to go out and buy worms everytime the weather hits 35*C in Melbourne (lots – here is a few tips on how to survive those days), is that people can share (a novel concept I know)! Worms take about 6 weeks to get to full capacity, so after that one can give half ones worms to someone who has lost theirs for whatever reason.
Related to worm-farms is composting. I recently made my mother’s sister a compost bin (a cardboard box weighed down with bricks after the first one blew away – whoops). I also wrote her up a list of what can and can’t go into the compost (for a good website – check this out). However I would say the basic rule is any raw chopped up veggies (bar onions – which apparently kill worms, or so I’ve heard… can anyone confirm or deny this?). Joanne and I disagree on a lot of compost points – I chop things up so they break down easier, Joanne doesn’t bother; I put seeds in (so they GROW without me doing anything), Joanne does not (she says they make stuff grow in the compost).
However look out! Some people are not very forward-thinking, and don’t think composting is necessary. Scary.

Talking about growing seeds, Corrente has a pretty intense series on growing seeds, this book by Nancy Bubel seems to come highly recommended from a number of sources. Still on the topic of seeds, leftover sunflower heads can be used as a cheap bird feeder.

Moving up from seeds, there is the food side of things. I have read a couple of things about urban foraging, and if anyone knows anything about what can be urbanly foraged in Melbourne I would be very interested. The Vic Market website has a great list of seasonal veggies (with pictures!), that I intend to make good use of, especially when I move out of home, and when you buy too many fresh veggies, you can read all about how to freeze them here. In my own life I made Nectarine Jam using about 10 Nectarines (and one peach) that were starting to go mouldy, I cut those parts off, and it turned out really well :).

Now, if one is to freeze all this excess produce that we have grown and bought, we are going to need electricity to power the freezer. At 15metres tall, these are probably not appropriate (or within the budget) for most people, however I know people (okay, my boyfriend) who can make a homemade windmill that works and everything. My father has suggested that the fact that batteries and the like still need to be used is problematic as that is not truly sustainable, but still, while we are doing the ‘use energy’ thing, wind power is so much better than coal (especially dirty coal).
Homegrown Evolution featured a bike-powered washing machine. Which takes away the need for a battery to store charges or a grid to feed into.

And of course, the wine cellar to end all wine cellars, one that doesn’t take up too much room as well. I would love one of those now, and I would have loved a cubby-hole like that as a kid! Something a little easier to create yourself is this handy little stool, this will help reach those high up jam-jars and other preserves that I have not yet worked out how to make.

This flowchart/brainstorm lists a bunch of good ideas that are worth researching and implementing.

And to finish up, if anyone is interested in reading more on the suburbs, this series by The Oil Drum is worth looking at.

Gah! I totally forgot to add the link that inspired me to write this post. Amazing to see good stuff come out of a tragic situation, it makes me want to move to the US and buy a $100 house.

I have discovered the best source of knowledge for the future. People over the age of… well I don’t know the exact age, but my Oma (who I refer to as Joanne) is 70 and she qualifies.

Last night around the dinner table I asked how you can keep growing parsley and other herbs, because she was saying the coriander went to seed and she had to pull the whole plant out. So I wondered, when transports stops being widely available, the possibility exists of nurseries not keeping seedlings for us to conveniently go and buy a new coriander or parsley plant. So how does one propagate that plant. The answer for parsley is that when it goes to seed, then seeds grow (no way!) and you can collect them and then grow then, but you would need a bit of a glasshouse. She also reckoned that if you just leave the parsley to go to seed then the seed fall on the ground and grow into new plants.
That being said, she has a parsley plant that has been going strongly for 3 or so years because she keeps trimming it back. So I figure you need two sets of plants, the ones you are growing for seeds, and the ones you are growing to eat. Because we also talked about carrots, and how Joanne planted carrots from seed as a kid (although mum said that is the best way when she was over the other day). We guessed that if you leave your carrots to grow long enough then the stalks must produce seeds. Again, you would need to have digging-up carrots, and seed-growing carrots.
Probably all this information could have been read on the internet or from a younger gardener. But I like it when information comes from a person.

Then this morning we were talking about showers and she told me how when she was a kid they used to have a bath once a week, cos the bath water had to be heated up using a bath-heater.. Then when she was about 12 her mother told her she would have to start having showers everyday, so she used to go out and chop kindling with a little tomahawk (eat your heart out Lenore) and heat up enough water for her shower. That amazed me, because I forget (or don’t realise) how she lived in a time before many of the amenities that we have today, especially as she grew up in the country.
Okay, I just asked my Opa if he had to heat the water for his bath, and he drew me a picture of what they used as a bath/shower heater.
What he explained to me doesn’t involve wood, but gas and, of course, water. He says the gas couldn’t be turned on without turning on the water. and that it heated the water up then there was a tap that meant you could either fill up the bath, or direct the water up to the shower-head. I guess there isn’t too much choice about how hot you have your water.

I hope to continue learning valuable information out of them for the future. I thought it would be good to catalogue it here, otherwise I will forget. 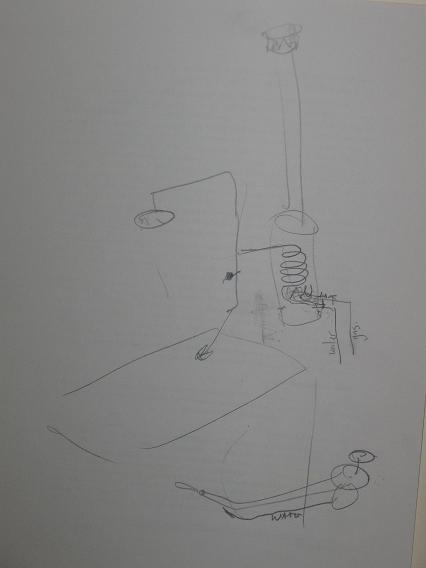 Question: Does anyone besides me read my blog? I am interested to know as mostly it is more for me than for others, but yeah. Let me know 🙂